In this day and age, we are lucky to have access to several handy devices that make our lives easier. One of those devices is the remote controlled garage door opener. The little remote clipped to your sun visor is actually a radio transmitter that sends a code to a receiver, also a radio transmitter, located on the garage door opener.  These transmitters are set to the same low frequency so they can communicate with each other. This is what sets your garage door in motion. The convenience of this little gadget is tremendous, and this is never more obvious when your garage door opener isn’t working.  Anyone who has backed out of the garage in the freezing cold and pressed the little remote button over and over, at different angles, with no luck, eventually getting out of the car to manually shut the garage door, suddenly appreciates this little device.

My Garage Door Opener Isn’t Working, What Should I do?

Your first instinct if your garage door isn’t working is to run to the store and buy batteries for your garage door remote. This is a simple, and common, fix. It’s a good idea to take the old batteries with you to the store to make sure you get the right ones. Also remember the old adage that you get what you pay for, which definitely applies to batteries. Using a higher quality battery ensures a longer battery life and a sufficient charge to the remote. Simply flip the garage door remote over and pop open the battery compartment. Slip in the new batteries, and convenience is restored.

However, before you run to the market, you should do two things. First, open the battery compartment of your remote and check the battery contacts.  If they seem worn out or dirty, or even wet, this could be the cause of your problem. The battery contacts may need to be cleaned or dried before putting the batteries back in.  Once you’ve checked the contacts, then check that your other garage door remote control works. Most families with a garage have more than one remote, especially since many families these days have more than one vehicle. If one remote functions perfectly and the other does not, you can bet that it’s a battery issue. You might find, though, that neither remote works, which means you have a bigger problem on your hands.

Both the remote control and the receiver have a plastic covering over the radio transmitter. This plastic cover is made to resist scratching, but if it gets dropped or metal is rubbed against it, it can be scratched. You can clean this cover on the receiver with a soft, damp cloth, allowing the signal to pass through and be received unimpaired. The plastic cover can also be polished with special plastic polishing agents. Unfortunately, if the cover on the remote becomes scratched or dented, it’s highly likely that you will need to purchase a new remote.

Since you’re already checking both the receiver and the remote, you might want to check for something that could be interfering with your receiver. It’s possible that your garage door opener isn’t working because something is blocking the transmitter, even something as simple as cobwebs or debris. Clearing the path could mean a better signal between remote and receiver. While you’re up there, check the antenna, if you have one. Often the antenna hangs straight down. A simple adjustment by moving the antenna to the side might also fix the problem. 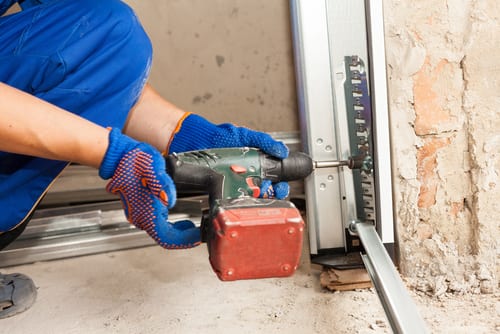 Let’s say you’ve tried the simple fixes but none of them have been successful. The possibility exists that your receiver and your remote controlled garage door opener might need to be reset.  Both devices are like little computers, and they sometimes need to be rebooted. Removing the batteries from the remote for about 30 seconds, as well as unplugging the receiver for about 30 seconds should reset the circuit boards, causing your remote to begin working again.

Check the Remote and the Receivers

Garage door remotes and receivers have matching codes they send back and forth to each other when you press the remote button. Remotes and receivers used to send the same codes over the same low frequency every time. This became a problem when your remote could also open the neighbor’s garage, and it became even more of a problem when thieves discovered that they could break into garages by trying different codes on another transmitter. Plenty of families have stories to tell about things, including cars, missing from their garages because a thief figured out the code and pilfered their stuff. The invention of the rolling code, a code that changes after every use, innovated the garage door remote issue, but the concept of transmitting codes certainly isn’t perfect.

Don’t Get the Codes Mixed Up

Sometimes the code in the remote gets mixed up for a variety of reasons and the remote code needs to be reset in order to communicate with the receiver again.  In order to erase the codes in the transmitter, find the LEARN button on the receiver and hold it down for about six seconds. The learn indicator light will go out, meaning that the codes are erased. Then you can reprogram both by holding down the LEARN button on the receiver until the light comes on, and then hold down the remote button for a few seconds. Either the LED light on the receiver will flash or you’ll hear two clicks. Test your remote control by pressing the open/close button and checking that your garage door moves.

It is pretty simple to fix a garage door remote on most occasions.  With a little effort and investigation on your part, the average homeowner can solve the problem.  In the possibility that none of the quick fixes worked, you will have to accept the fact that the problem is not remote, but the receiver. In this case, the receiver itself will need to be replaced, which can be done by the homeowner but might best be done by a garage repair professional to ensure the new receiver is installed correctly.

Even though technology has come a long way, several things can still go wrong with it.  Thankfully, if your garage door opener isn’t working there are several possible fixes so no one has to go without its convenience for too long.